Book Review: Portraits of the Bison

During the National Bison Association Conference earlier this summer, Caleb and I purchased a book that was written by Canada's leading bison expert, Wes Olson, called Portraits of the Bison. As the summer went on, we found ourselves frequently referring to this book, since it contained lots of pictures and information on the animals we care for on a daily basis. It's a great book for bison and nature enthusiasts alike! Check out my review below.

Portraits of the Bison: An Illustrated Guide to Bison Society, 2nd Edition
Written by Wes Olson, Photographs by Johane Janelle

This beautiful book about the North American Bison features one of the biggest bison photo collections in print. The full color photos by Johane Janelle of these amazing animals, accompanied by Wes Olson's eloquent writing style, really draw you into the world of bison societies.

Chapter 1 tells the story of the bison saga: from plentiful roaming herds to near extinction to the conservation of bison in today's world.

Chapter 2 goes into detail about safety and awareness when being around bison – whether you own a herd, or just happen to stumble upon a lone bull while hiking through Yellowstone. Olson offers sound wisdom on being aware of a bison's 'bubble,' and how to look for signs like pawing and head tossing to tell when an agitated animal might charge.

Chapter 3 discusses the seasonal structure of bison herds and provides the reader with a glimpse of what it's like to be a bison in the spring when bison cows abandon their yearlings to attend to new calves, or during the summer, when breeding season can draw hundreds of bison together.

Chapter 4 features photos and drawings of male and female bison at different stages in their lives so that the reader can learn to identify the age and gender of bison at a glance.

Bison lovers and naturalists of all kinds are sure to enjoy this informative book! It is written in such a way that people who may not be very familiar with bison can understand the material, through drawings, diagrams, descriptive language, and of course, plenty of photographs, while still being entertaining and enjoyable for the more seasoned bison folks out there.

The part of the book that engaged me the most were the drawings by Wes Olson. The details of them, along with the descriptive captions and diagrams indicating each part of the animal, were fascinating to someone who can't draw! Wes has a way of bringing the animals on the pages to life with each stroke of the pen.

Being fairly new to the bison industry, I found Portraits of the Bison to be a wealth of information, especially when it came to telling the gender of our summer calf crop. The book taught me to look for a smooth underbelly on heifer calves, and to look closely for little round buttons that indicate a calf is a bull. With the drawings from the book as a guide, I'm now fairly confident in my observation skills!

Portraits of the Bison can be purchased through the National Bison Association for $39.95. 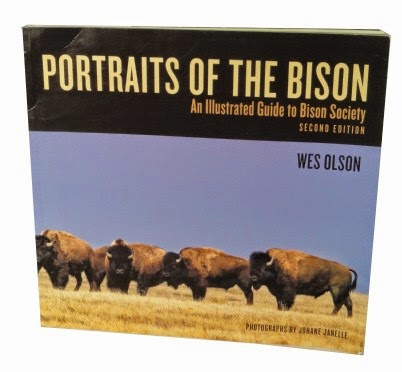