Bison Calves Born on the Ranch

I'm taking advantage of another rainy morning to inform you that it's officially calving season! They actually started about two weeks ago, but we have had 11 calves since then.

The first three bison calves were all born on the same day, and it's been one here, one there since then. For all of you that have never seen a bison calf, they are really cute with an orangish brown color, and soft, almost fuzzy fur. 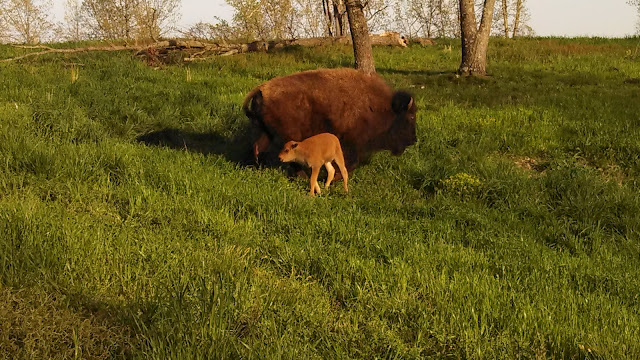 Cold Weather in May

It seems that Mother Nature wanted to show everyone who's boss one last time. The last week or so it's been 75 degrees plus, and now a nasty front has moved in. The bottom has dropped out of the warm temperatures and it's now in the low 30's. It's actually snowing right now and it's May 3rd! I heard on the news that Springfield, MO has been keeping record of the weather since the 1880's and this is the latest snowfall date on record.

The perfect opportunity to get you all caught up on what's been going on around here.

When I last wrote, I told you about Tipsy and informed you that I had planted some Doc's Wildlife Blends. Well, I'm sorry to say that Tipsy didn't make it. Although he was showing signs of improvement, it became obvious after another week or so that he had neurological damage and that he would never be the same. We continued to pick him up and get him to his feet, but his balance was not there and the slightest hill would make him fall over.  I found him dead in a pond one morning.  He had drowned.

On a positive note, the Doc's Sandy Bottom Blend as well as the Doc's Premium Clover I planted has emerged and is doing well. I will include a picture when it gets a little bigger, right now it's just too small to see.