Ferdinand and Eeyore: New additions to the Miller Bison at Elkhead Ranch family!

Ferdinand and Eeyore are the newest additions to the Miller Bison at Elkhead Ranch livestock family. They are yearling Brahman bulls and currently are weighing in at 1200 lbs. and 1150 lbs., respectively. They are going to be BIG boys! These big boys are full brothers and come to the us from the England Brahman Ranch in Mercedes, TX. (Thank goodness they are used to the hot weather because since they have arrived, we have been in a heatwave!)

Even though Ferdinand and Eeyore are full brothers, each bull has his own distinct personality. Ferdinand was named by my grandsons because one of their favorite books is Ferdinand the Bull. Ferdinand will let you stand and scratch his poll, rub his ears and wiggle the many folds of skin under his chin. He was hauled around the US going to Brahman Shows and is halter broke, so he is very tame and easy to handle. He has the 'England Brahman Bulls' brand on his right hip, and #307 on his left hip. He is so gentle, I wouldn't even hesitate letting our grandchildren pet him! 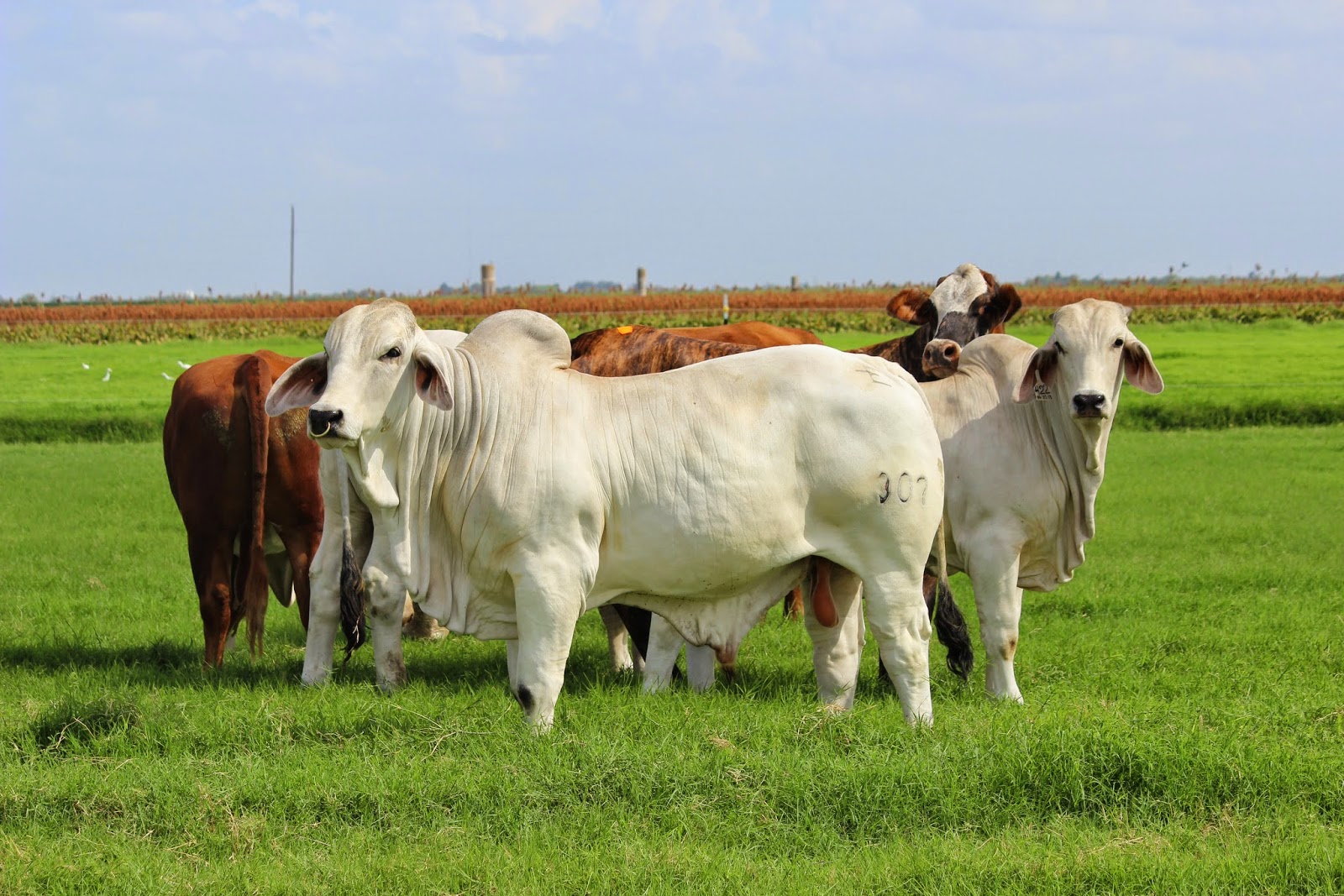 Eeyore also has his own unique personality. He is much like the Winnie the Pooh character he is named after; a bit shy with long, drooping ears. When he first arrived at the ranch, he would stand away from me when I fed Ferdinand from my bucket. But, slowly, he has begun to trust me. Today, I can scratch his poll and pet him on the head. He is still a bit shy around new people, however. He is much more comfortable with only 1 person in the corral at a time. He, too, has the England brand on his right hip, with his #306 on his left hip. I think he is going to be a darker gray color than Ferdinand.  He has already become darker around his hump and neck, since he has been here. 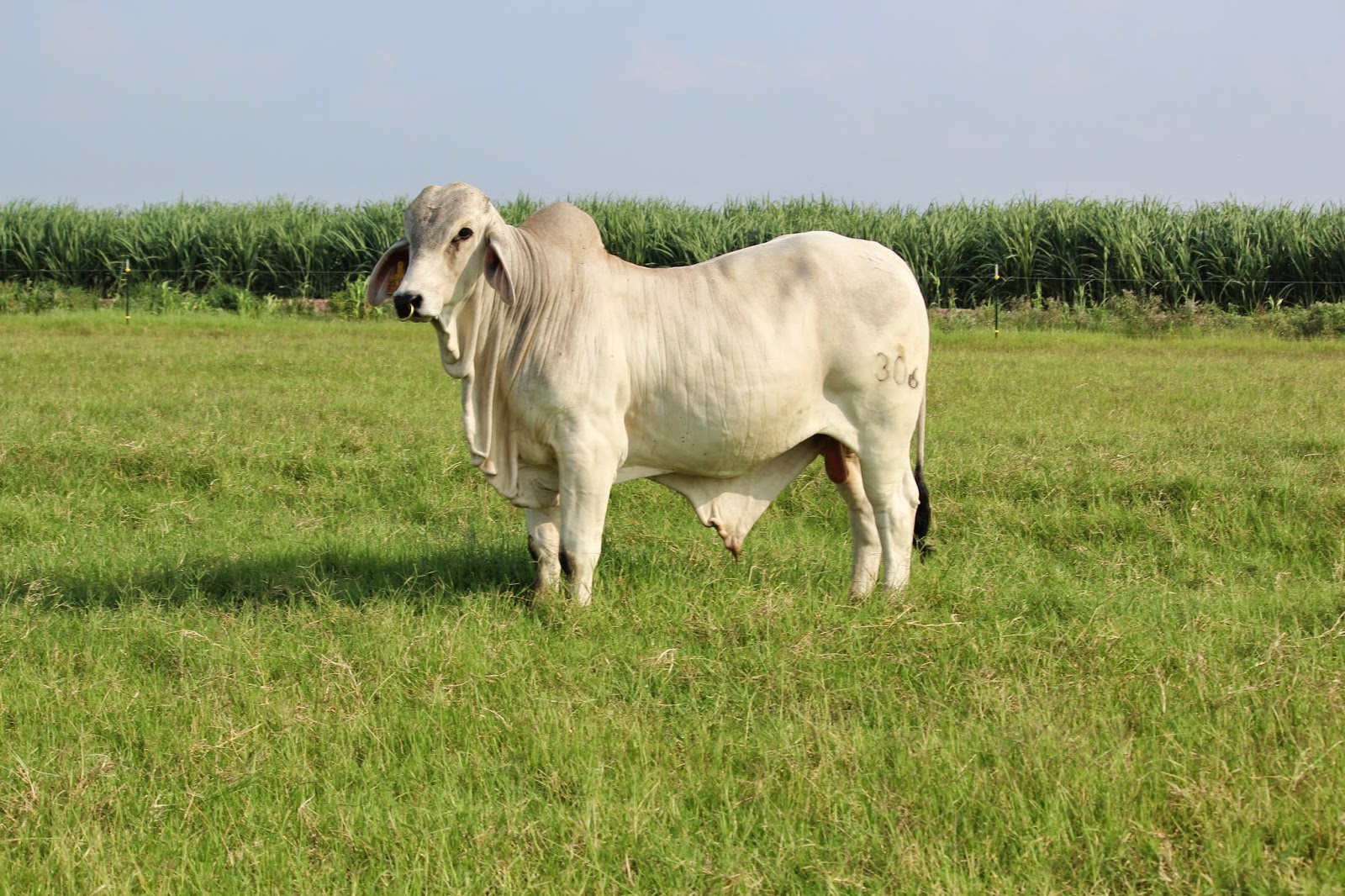 You might be wondering why these Brahman bulls were purchased.


Well, it is simple. They are going to be the 'husbands' to our Hereford cows. The cross between a Brahman bull and a Hereford cow produces what is called an F-1 Tiger Stripe. These Tiger Stripes (we have 6 cows on the ranch- see pictures below) are easy 'calvers', easy keepers, and don't mind the heat. There is a good market for the Tiger Striped calves, especially the heifers. 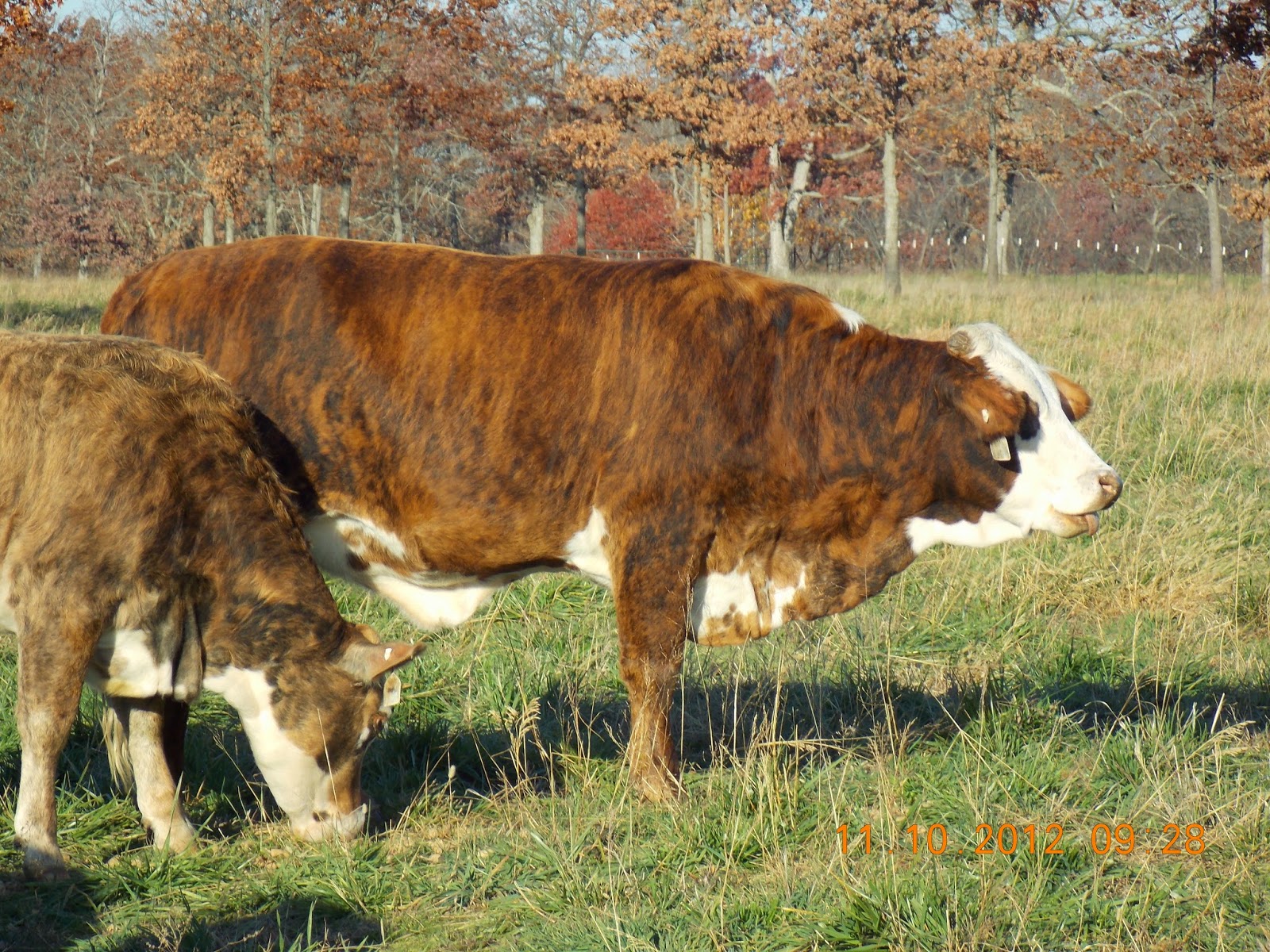 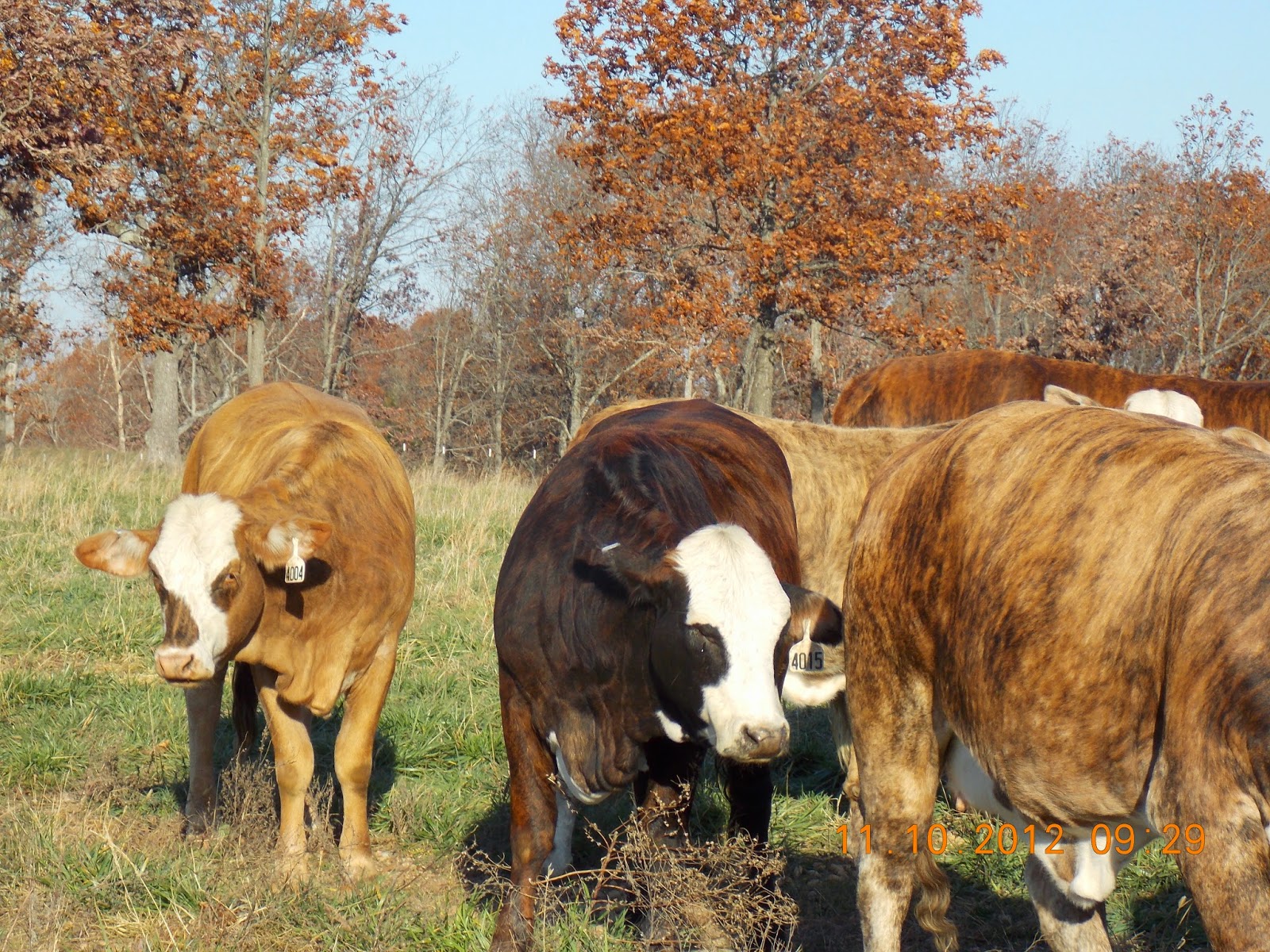 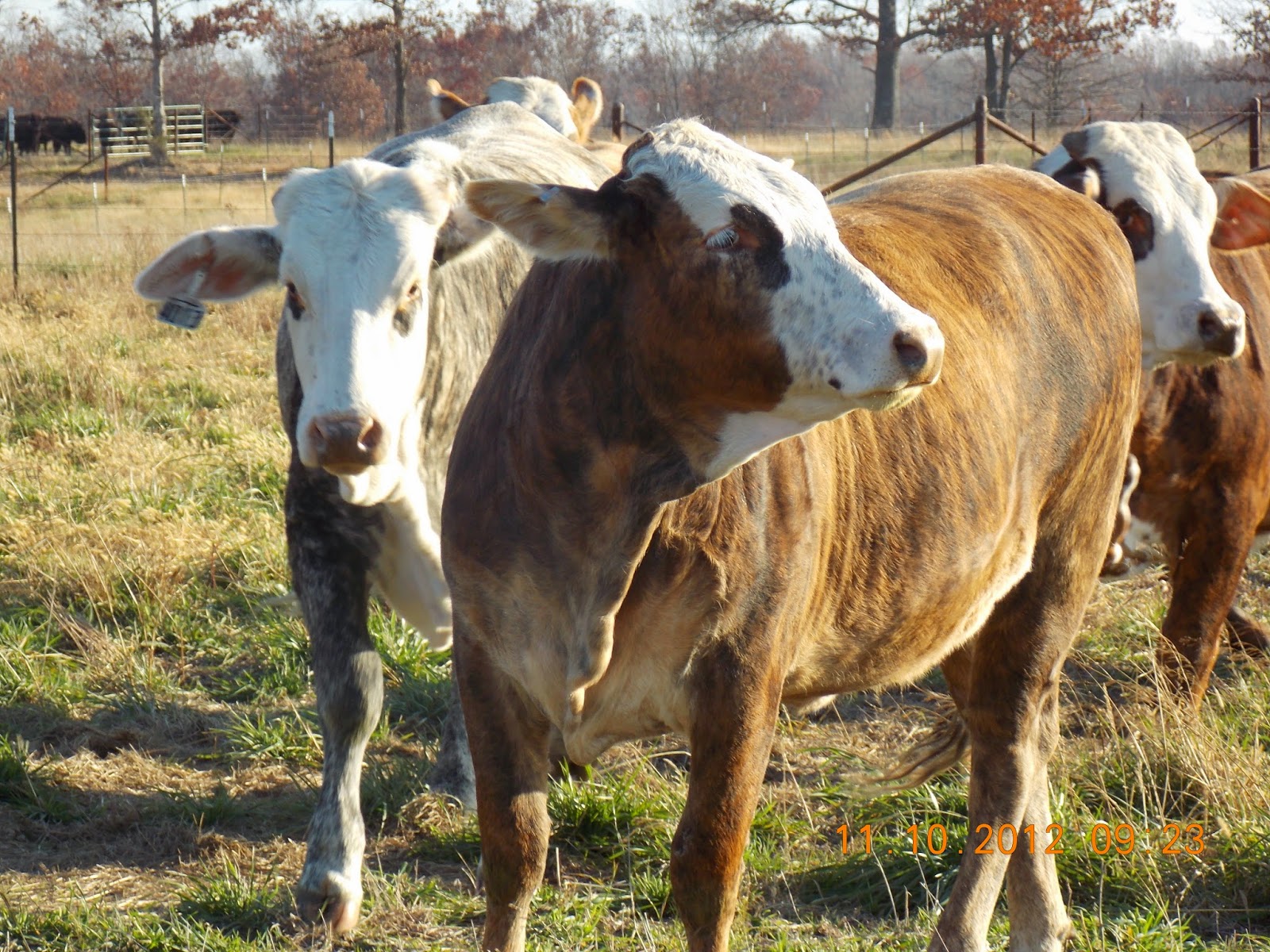 The latest pictures of Ferdinand and Eeyore enjoying their breakfast. 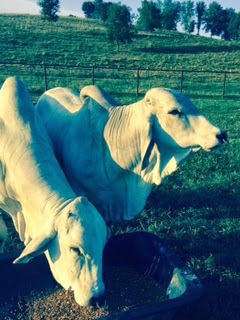 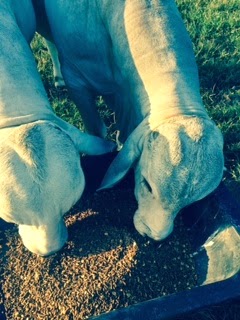 I can't wait to see the first calves that these big boys produce. They will be turned out with a few open Hereford cows very soon. So, the first babies F-1 Tiger Striped babies should arrive sometime in June, 2015.  The female calves will be Golden Certified with the American Brahman Breeders Association.   I will be anxious to share pictures of these new babies when they arrive!!!
Posted by Unknown at 4:34 PM