Herefords in the Fall lead to Next Year's Tigers

I believe an introduction on here is in order! We've had some additions to the ranch lately that haven't been shared here on the blog. For those of you who follow us on Facebook, Twitter and Instagram, you will have seen our pictures of the fall calves coming in. These calves aren't our usual cinnamon colored bison calves though. We have decided to enter the realm of grass fed beef with a herd of purebred Hereford cows from the Journagan Ranch. 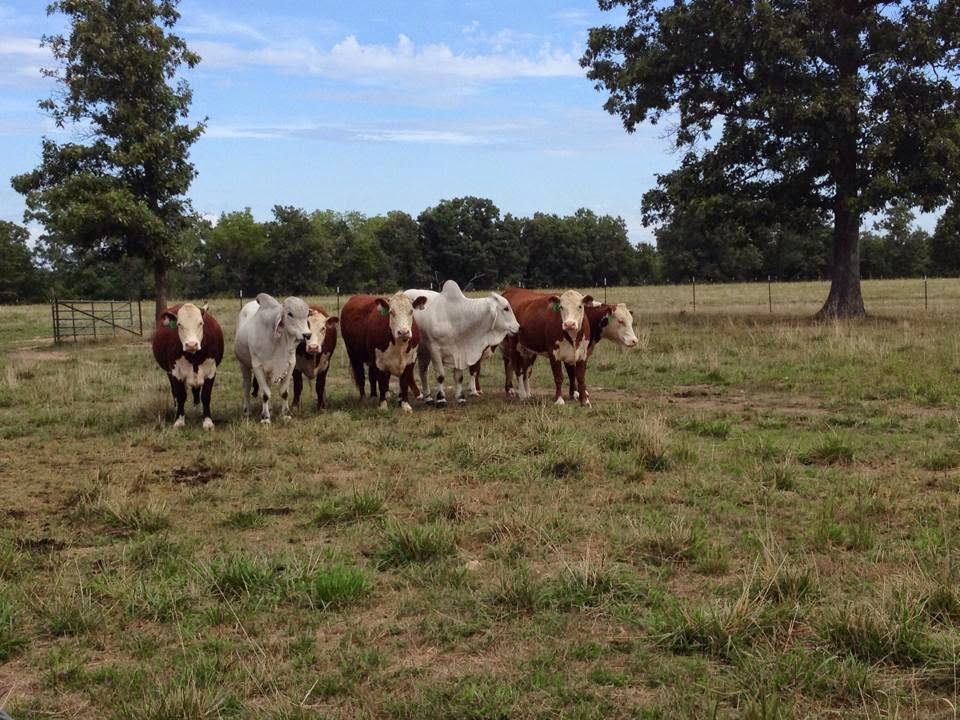 Our recent addition consists of 38 head of Hereford cows, 31 of which were bred to calve this fall. This season they will calve out purebred Hereford calves as you have seen from our social media pictures, but next year they will be bred to our two Brahman bulls. Now someone may ask "Why take a pure bred Hereford only to breed it with a Brahman?" Well the answer lies in the genetics of these two cattle breeds as I'll elaborate.

Hereford cattle have long been bred as an outstanding meat breed. Their lineage dates back to the 18th and 19th century. They were originally bred in Herefordshire southern England for use as a dual purpose beast of burden and superior beef animal. The breed was originally brought into the United States as long ago as 1817. Thanks to the traits selected for this breed they muscle very well for meat production and tend to be easy breeders, as well as easy calvers; on the down side though, they aren't as well adapted to heat stress being initially from England, and they also have a predisposition  to cancer eye.


Brahman  cattle are also a breed that was imported to the United States long ago with the first cattle being brought in in the late 1800's. The story on them gets a little more interesting though as they were a very difficult breed to import being as they are considered a sacred breed in the Hindu religion. The animals brought in actually consisted of four different breeds of Indian cattle with the vast majority of them being bulls. With these animals being bulls, most were bred to the European base meat breeds raised in the south. After five generations of breeding back though your breeding stock can be returned to a base of (31/32) pure, thereby showing the characteristics initially brought here.

The benefits of the Brahman breed are perfect for creating a solid genetic base in grass fed beef. They sweat whereas the European don't, thereby along with their pendulous skin allows them to comfortably withstand heat above 105F whereas most cattle show losses in production over 75F. Brahmans also have a low birth weight with a fast rate of gain and don't generally have issues with cancer eye.

What this leads us to is the basis of Hybrid Vigor. When one breed is bred for a certain set of traits for an extended period of time other traits often become depressed. Hybrid vigor takes two breeds with both their great traits and bad traits and combines them to create a cross that often exemplifies the best of both breeds while diminishing or completely replacing the flaws bred into either parent breed.

This is what we are achieving by breeding the Brahman bulls to our Hereford cows. We wind up with a calf that has a low birth weight but grows quickly and efficiently on grass, tolerates higher temperatures, resists parasites better and has low incidences of cancer eye. The colors created also are a plus as when these two breeds are crossed we get what is known as a "tiger stripe" as shown in the picture. With all of these traits we hope to be able to provide our customers with a superior grass fed beef product in the years to come.